For a more dramatic illustration, imagine having to find your way around in a foregin country without speaking the local language. Now, imagine the same is happening but in your own country and with the language you grew up with. This might sound like a strange nightmare to most of us, the idea of not being able to properly communicate in your own language anymore. Unfortunately, after having suffered from brain damage, these troubles often become part of people’s daily lives. Such language disorders due to brain damage are called aphasia. 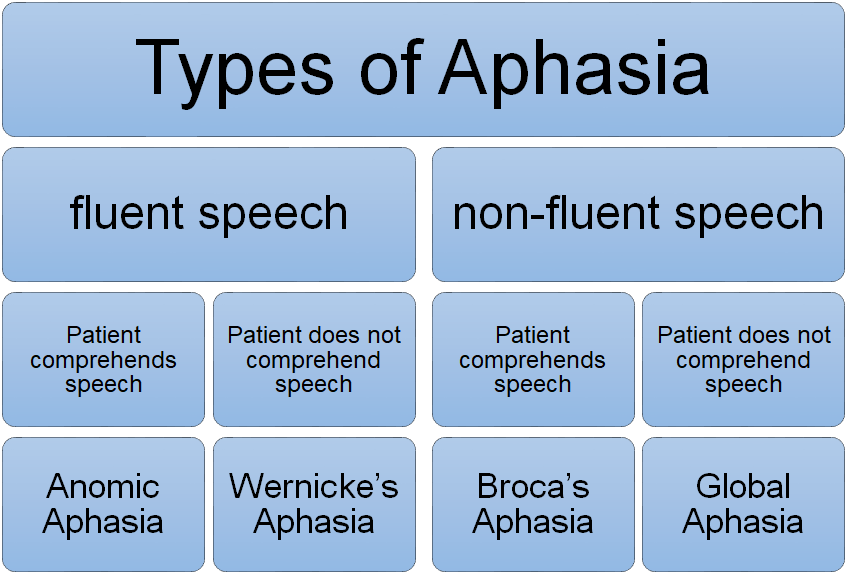 Broadly speaking, aphasia occurs after damage to brain areas that are important for language. Such damage could be due to an accident, head trauma, an infection, or a tumor. Even age-induced brain atrophy (loss of brain cells and their connections due to age) or dementia can lead to language difficulties. Nevertheless, the most common underlying cause of aphasia is stroke, which applies in approximately 80 percent of patients with aphasia. A stroke is a sudden condition in which the blood flow in affected brain areas is either stopped (ischemic stroke) or reduced due to bleeding (hemorrhagic stroke). Both lead to malfunctioning of affected brain areas or even death of brain cells. Depending on the location and size of the brain areas that are damaged, the aphasic deficits can be more or less severe. This leads to different types of aphasia, which can affect people’s lives in different ways.

If we think of language and how we use it in our day to day communication, we quickly realize that language is not only speaking. In order to engage in a conversation with others, whether spoken or written, it is crucial to understand. Hence, we need to listen to what others are saying or read what they are writing, and make sense of this information. Only then we can react to it properly so that the exchange of information becomes a successful conversation. The different types of aphasia are classified in a similar way, based on whether patients have trouble with speaking or understanding.

Anomic aphasia is an example of a less severe type of aphasia, and describes difficulties in finding the right words. People affected by this type of aphasia can usually read and understand speech, but have trouble finding the specific words they want to use in their own speech or writing. If language production is affected more generally, people suffer from Broca’s aphasia (also called expressive aphasia). Here, people have trouble forming full sentences and often only string together necessary content words, in order to convey their message to others.

Some patients suffering from a fluent type of aphasia have no difficulty with producing fluent speech. Often the words and sentences that these patients say are very random and make no sense, which is called Wernicke’s aphasia. These patients also have difficulties understanding speech produced by others. The last and most severe type of aphasia is the global one. Suffering from global aphasia basically means that language production as well as comprehension are heavily impaired. Patients with global aphasia often only use single words or commonplace phrases to communicate.

A wide-spread and commonly accepted notion about aphasia is that production difficulties are related to lesions in brain areas that are involved in language production, whereas fluent types of aphasia with difficulties in understanding speech are due to lesions in brain areas that are critical for language comprehension. In reality, however, this relation is not that simple,and lesions due to brain damage are not concentrated into a specific area of the brain that is occupied with only one job. Moreover, complex (language) processes never only rely on one specific part of the brain, but preparing or understanding speech involve several brain areas to work together. Therefore, classifying people’s aphasia for a specific type does not necessarily mean that their brain lesion appears where it would be expected. Vice versa, looking at size and location of people’s lesions does not always lead to the type of aphasia they are actually suffering from.

Next to aphasia, patients with brain lesions can also suffer from other communication disorders. These result from damage to brain areas that are important for the planning and regulation of movements. Because these disorders are related to global cognitive functions, and not only language processing, they are distinct from aphasia. Moreover, because these patients are not impaired in their language, specifically, they are aware of the speech errors they make and can attempt to correct themselves if possible.

Dysarthria describes an impairment of movements that are necessary for controlling and articulating speech sounds. This can affect any muscle group involved in these movements, which stretches from lips and tongue to larynx and respiration muscles. In practice, speaking is usually quite an effort for dysarthric patients. Especially things like regulating breathing or speaking voice during speech as well as articulation and intonation can be impaired. Depending on how severe these impairments are, such patients’ speech can be only slightly or fully incomprehensible to others.

Apraxia, on the other hand, refers to a slightly earlier stage of language production than dysarthria. Here, patients have difficulties with planning and programming their speech movements, specifically with the sequencing of different sounds. This means that they can conceptualize and formulate their speech, but are unable to articulate it properly. Often, apraxic patients try to find the correct mouth position for formulating a specific sound by means of trial and error while speaking. Apraxia can be a very complex and patient-individual impairment.

All in all, the bigger picture on the different types of aphasia and other communication disorders is a rather messy one, with a lot of similarities and overlap between variations. This explains why, in practice, it is quite difficult to diagnose patients with language or communication impairments. In a second part of this article, we will look into diagnosing and treating these disorders in more depth.