This is a hard one actually, but if I had to describe my overarching theme it would be: how do the languages spoken on the Ryukyu islands in the south of Japan differ from Japanese, and what can these differences tell us about language variation in general? Within this theme, I studied different parts of the vocabulary: basic words, which we assume most, if not all languages, use (‘fire’, ‘to walk’) and three groups of related words that form what linguists call a ‘semantic domain’, a coherent set of meanings: words for colour, names for body parts, and terms for actions like ‘cutting’ and ‘breaking’.

Languages differ from each other in several ways: they can differ in how they pronounce words, like green in English, groen in Dutch or grün in German; they can use different words, like body in English, lichaam in Dutch or Körper in German; and they can even differ in the meanings that these words cover, like how Dutch has two separate words for ‘cutting with a pair of scissors’ (knippen) and cutting with a knife (snijden), but English does not (cut is used for both actions), nor does German (schneiden is used for both).

We use language to capture the way we think about our experiences with the world around us. There is great diversity in the experiences of people of different cultures and this has led to thousands of different languages across the globe. Studying different types of variation (like those listed above) is crucial if we want to understand how languages work. It is important that we do this for many different languages because this helps us to find patterns in the variation. However, many smaller languages are being spoken less and less, so we must also look at these, because they might possess unique features that we will not know about if a language goes extinct. It is very likely that we will still be able to study Dutch, English or German in 100 years, but there are many languages that will no longer be around by then. The Ryukyuan languages that I studied are just one example of such endangered languages.

Can you tell us about one particular project?

In one project we looked at words for colours, like red, black and white. This topic is pretty famous in research on language and there are studies on many languages. A well-known fact is that people speaking different languages classify colours differently. Some languages have a small number of broad terms (such as a single word for ‘warm’ colours), while others distinguish for example pink, red, orange and yellow with separate words. However, across languages we see that the number of colour words tends to increase over time, and the order in which colours get added appears to be fairly predictable. Most of these studies are, however, from decades ago. In fact, there was also data about the Ryukyuan languages from the 1960s, a time when they were not yet as endangered as they are now. This created a unique opportunity for me to study what has changed since then. Given the endangered status of Ryukyuan, I was especially interested in any influence from Japanese, which is the majority language, and English, which is of course a world language. I showed Ryukuan native speakers a set of coloured pieces of paper and asked them to tell me the colour of each piece. I then compared my new data to the data from the 1960s and found that Ryukyuan speakers nowadays do, in fact, use Japanese and English colour words, which was not the case in the 1960s. At the same time, the task showed that Ryukyuan colour words are still used in a distinct way that is different from Japanese. For example, the words for ‘red’ and ‘blue/green’ cover broader colour ranges than the corresponding words in Japanese. Also, the meaning of these words did not change much in the last few decades. This shows that some parts of the vocabulary can remain stable even if there are changes in other parts of the vocabulary due to outside influence.

What was your most interesting/important finding?

What I personally found most interesting when comparing the Japanese and Ryukyuan languages is that there was always a clear difference between the two. Even though the Ryukyuan islands are only small and cover a smaller area than the Japanese mainland, there was generally more variation between the Ryukyuan languages than in the Japanese dialects. In biological evolution, we also sometimes see that species develop in very different ways on islands when they are isolated, and it seems that languages develop in similar ways in an island setting.

What are the consequences or implications of this finding? How does this push science or society forward?

It highlights the role that geography plays in language variation and change. While this in itself is not news for linguists, I still think it is interesting to see how a factor that has nothing to do with language can have such an influence. It opens up the possibility to study language variation and change from a broader perspective, using methods from fields that study similar processes but outside of language, like biology and ecology. Recently, there is increased interest in the systematic study of “mountain languages”, which have been argued to show greater linguistic complexity, for example in their sound system or grammar. There have been calls to find out if there is a thing such as “island languages” too. I think it is exciting to see what these perspectives can bring to future linguistic work, especially for Japan, which is a nation characterized by both mountains and islands.

As many scholars always want, I want to gather more data from more languages. Japanese and the Ryukyuan languages form a small language family, but I would love to see how the findings I presented in my thesis scale up to larger language families like the Indo-European languages, or the Austronesian language spoken across Southeast Asia and the islands in the Pacific Ocean. Luckily for me, I am currently working at Uppsala University doing exactly that: studying variation and change in word meaning across the Indo-European language using new analysis methods. 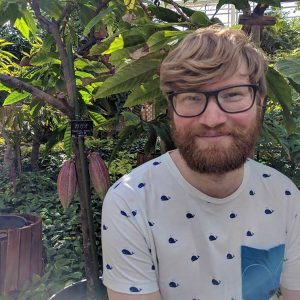