Letters and numbers can have colours

Synesthesia can be experienced in many different forms, characterised by the interaction of different or the same senses (taste, sight, smell, touch and sound). The most common and, as a consequence, the most studied form of synesthesia involves letters and numbers and colours. Namely, synesthetes perceive a colour when they are viewing a specific letter or number.

Interestingly, each synesthete might see a different colour for the same letter. So for one person, the letter N could be light blue, whereas for another person it could be lilac. However, the synesthetic perception seems to be consistent over time, so the person seeing the letter N as lilac, would likely perceive the colour lilac every time they are seeing the letter N.

Scientists began studying synesthesia in the last century to understand its origins and its characteristics, such as the different types of interactions of senses. Some studies focused on the possible combinations of letters and colours, which are most frequently experienced by synesthetes. These more frequent combinations likely come from meaningful associations made during childhood, which is the period when synesthetic associations develop. For example, many female synesthetes perceive the first letter of their name as pink and this can be the result of the exposure to the gender stereotype of pink as female colour and blue as male colour.

In addition to meaningful associations, the possible letter-colour combinations can also come from differences in the specific language. First of all, the word that is used to describe a colour can influence the association between a letter and a colour. For example, English-speaking synesthetes perceive the letter Y as yellow and the letter R as red, since Y and R are the first letters of the colour names yellow and red in English. The colour of a letter can also depend on common words starting with that same letter; for example, some people perceive the letter D as brown, because the word dog starts with the letter D and most dogs are brown. In other words, if a common word is characterised by a specific colour, the first letter of the word can be associated with this same colour in synesthesia.

Do the colours of the letters depend on the language?

The previous findings mostly come from research on English-speaker synesthetes. However, synesthesia is also experienced by people who speak other languages around the world. As a result, scientists were curious to know if the same factors influence letter-colour combinations in other languages as well.

In a recent study, the influence of colour names and common words on the synesthetic experience was studied across six selected languages, besides English. In other words, can we consider these factors universal or are they rather language-dependent? The strength of the language influence of both colour terms and common words differed across languages. For example, in English and Japanese the colour name had the strongest influence on the perceived colour, whereas in Spanish it did not matter. On the other hand, common words had an effect on the colour perception in Spanish, but not in Korean, and English and Japanese had the strongest effect in this case as well. This means that the way in which these factors influence the synestic experience is not universal, but language-dependent.

Can colours also elicit the perception of letters?

Seeing letters can elicit the perception of a specific colour in some synesthetes, but does it work the other way around as well? Maybe! Although synesthetes do not “see” the letter associated with a colour when they see the colour only, scientists found out that seeing this colour can make them faster at finding the letter. They used an experiment where participants saw a word without its first letter. Participants had to fill in the right letter to complete the word, but two different letters could complete the word, resulting in two possible words. One of these words was a frequently used word, for example the German word “Brille”(glasses in English), and the other one was less frequently used, for example the German word “Grille’’, cricket in English) (see figure 1). In order to help synesthetes to find the right word, the colour associated with one of the missing letters (in this case B or G) was shown to them. Synesthetes found the letter faster for words that were less frequent, when they were seeing the colour associated with the missing letter. These results suggest that synesthesia works partly in both directions (letter → colour and colour → letter). 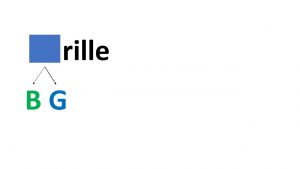 Figure 1: example of the words participants were seeing. By viewing the colour blue, they were faster in choosing the letter G and forming the word Grille (a non-frequent word in German).

While we still don’t understand exactly why a synesthete’s best friend’s name looks bright green, and their telephone number has rainbow colours, we know that factors like the language they speak can affect which associations are formed, and that the associations work in both ways. So seeing a rainbow may remind them of their telephone number, too! Overall, the study of letter-colour synesthesia offers scientists a great opportunity to study the factors influencing the representation, or the storage of letters and numbers, in the human brain. At the same time, language matters: only research focusing on more languages and the similarities and differences between them allows us to understand how some brain processes are applicable to more languages and how some others are language-dependent.

Do the colors of your letters depend on your language? Language-dependent and universal influences on grapheme-color synesthesia in seven languages – ScienceDirect

Did you know that synesthesia is partly caused by our DNA? Read more about our research project on the genetics of synesthesia here. You can also participate if you have synesthesia yourself.